I asked my father, what’s the one thing my grandmother used to can that people don’t can today.  Instantly, he said, pickled peaches.  That told me, he missed those peaches! And what better time to make them than right before Father’s Day.  I started searching cookbooks and my husband started searching the web for a recipe that sounded close.  I could remember the basics; such as, cinnamon, cloves, sugar and vinegar but needed a little reminding on the recipe.  With a little tweaking ~ we found it!  As the brine started to boil, my kitchen began to smell like Grandma’s and a flood of memories took over!  So here’s what we came up with:

This basket yielded 12 quarts.  Some people blanch the peaches but I peeled them; there’s less waste when they’re peeled.  As soon as the peaches are peeled, “treat” the peaches to keep them from turning brown in time.  To do this, put the peaches in a gallon of water mixed with 2 Tbsp salt, and 2 Tbsp vinegar.

I split these into 2 batches, any more than that and you can’t cook the peaches in the stock pot as needed.

Bring to a boil 8 cups of sugar, 2 cups of vinegar and 2 cups of water.  Once this gets started, place jars in the oven and turn on 200°.

Once at a good rolling boil, add about 40 peaches (1/2 of the basket) and continue to boil for 20 minutes.  At this point, I start my water for the lids.  It’s important to get that water to a boil and place the lids in it, but don’t boil the lids. 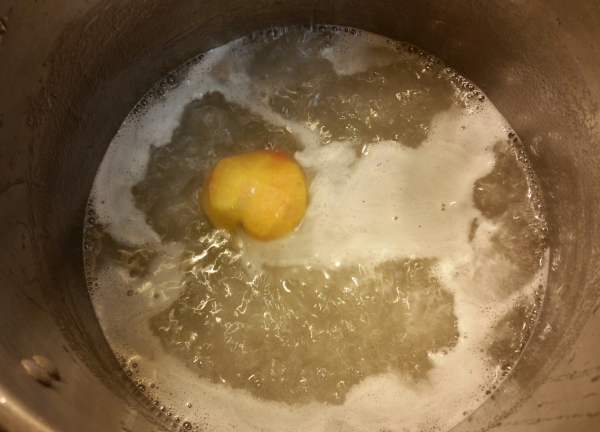 Place peaches and brine in hot quart jars.  Fill to the neck, leaving about an inch head space. Add 1 stick of cinnamon and 6 to 8 cloves to each jar.  Wipe the rims with a sterile clean cloth.  Place hot lids on the jars and tighten down rings.  Water bath 10 minutes.

These are a sweet treat and great to eat by themselves or over ice cream.  It had been so long since I had these that I had to sample some just as soon as I could…..I stepped back in time about 10 years!